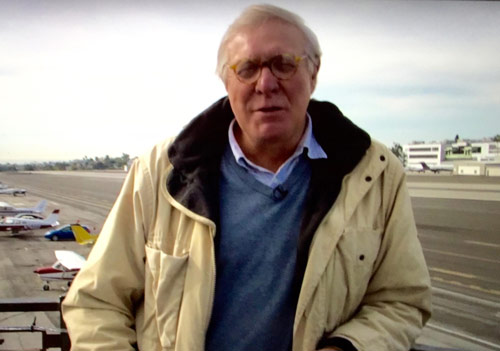 Gavin Scott is a novelist, broadcaster and writer of the Emmy-winning mini-series “Mists of Avalon”, Dreamworks’ “Small Soldiers”, Working Title’s “The Borrowers” and Sci Fi’s “Legends of Earthsea” He produced and directed more than two hundred documentaries and short films for BBC and the commercial TV in the UK before moving to the United States, where his first assignment was with George Lucas, developing and scripting “The Young Indiana Jones Chronicles”.

His screenplay “The Last Summer”, a thriller about how World War One began is being produced by Aristos Films, to be directed by Downton Abbey’s Philip John.

“Absolutely Anything”, the script he wrote with Terry Jones starring Simon Pegg and Kate Beckinsale, with Eddie Izzard, Rob Riggle and Joanna Lumley and the voices of Robin Williams and most of the Python team, will be released in the US this year by Lionsgate.

Archetype Productions and Lucas Foster (“Mr and Mrs Smith”) are set to produce Gavin’s World War Two supernatural adventure “Lost Squad”, a combination of “The Matrix” and “Where Eagles Dare”, inspired by the graphic novels of Chris Kirby.

For Germany’s Gruppe 5 productions he will be show-running a ten part series about Dona Gracia Nasi, a 16th century female Schindler who negotiated with Popes, Sultans and Emperors, set up a continent-wide escape route, set up a colony on the coast of what had been ancient Israel and saved thousands of Jews from the Inquisition.

He created and executive produced “The Secret Adventures of Jules Verne” a 22 part sci-fi adventure series set in the nineteenth century about, which was broadcast around the world.

He has appeared on Spike TV ‘s “Deadliest Warrior” as an expert on the Arab Revolt and also featured in Ridley Scott’s “Prophets of Science Fiction” series, and in British documentaries about Jules Verne and Harry Potter.

Gavin’s 8 hour adaptation of “War and Peace” for Lux Vida SPA, starred Malcolm McDowell and Clement Poesy and was directed by Robert Dornhelm (“Into the West”, “The Ten Commandments”).

For Castle Rock he scripted “Brooke”, the saga of a young 19th century Englishman who set up a dynasty of white rajahs in Sarawak, and “First American”, the story of revolutionary war hero Daniel Boone, who rose above personal tragedy to save America’s western settlements during the Revolutionary War.

Born in Hull, Yorkshire, Gavin emigrated with his family to New Zealand in 1961. At 17 he spent a year as a volunteer teacher in the jungles of Borneo, working with the children of head-hunters, after which he studied history and political science at Victoria University of Wellington and journalism at the Wellington Polytechnic. He returned to Britain overland across Asia in 1973, traveling through Sri Lanka, Kashmir, Afghanistan and Iran, and worked for Shelter, the British housing charity, before joining the Times Educational Supplement, from which base he also wrote features for the London Times.

After five years as a reporter and program anchor for BBC Radio Gavin began in 1980 making films for BBC Television’s Newsnight, covering literary as well as political subjects: among his interviewees, J.B. Priestley, Christopher Isherwood, Iris Murdoch and John Fowles. He then made documentaries on science and culture for series such as Horizon and Man Alive before joining Channel Four News, for which he made films until 1990.

It was during this time that he started writing novels, including “Hot Pursuit” (about a Russian satellite that crashed in New Zealand) and “A Flight of Lies” (about the hunt for the bones of Peking Man). His novel “Small Soldiers” was a bestseller for Grosset and Dunlap, and he has recently written a Dickensian historical novel set in the nineteenth century, “The Adventures of Toby Wey” and “The Age of Treachery” for Titan Books.