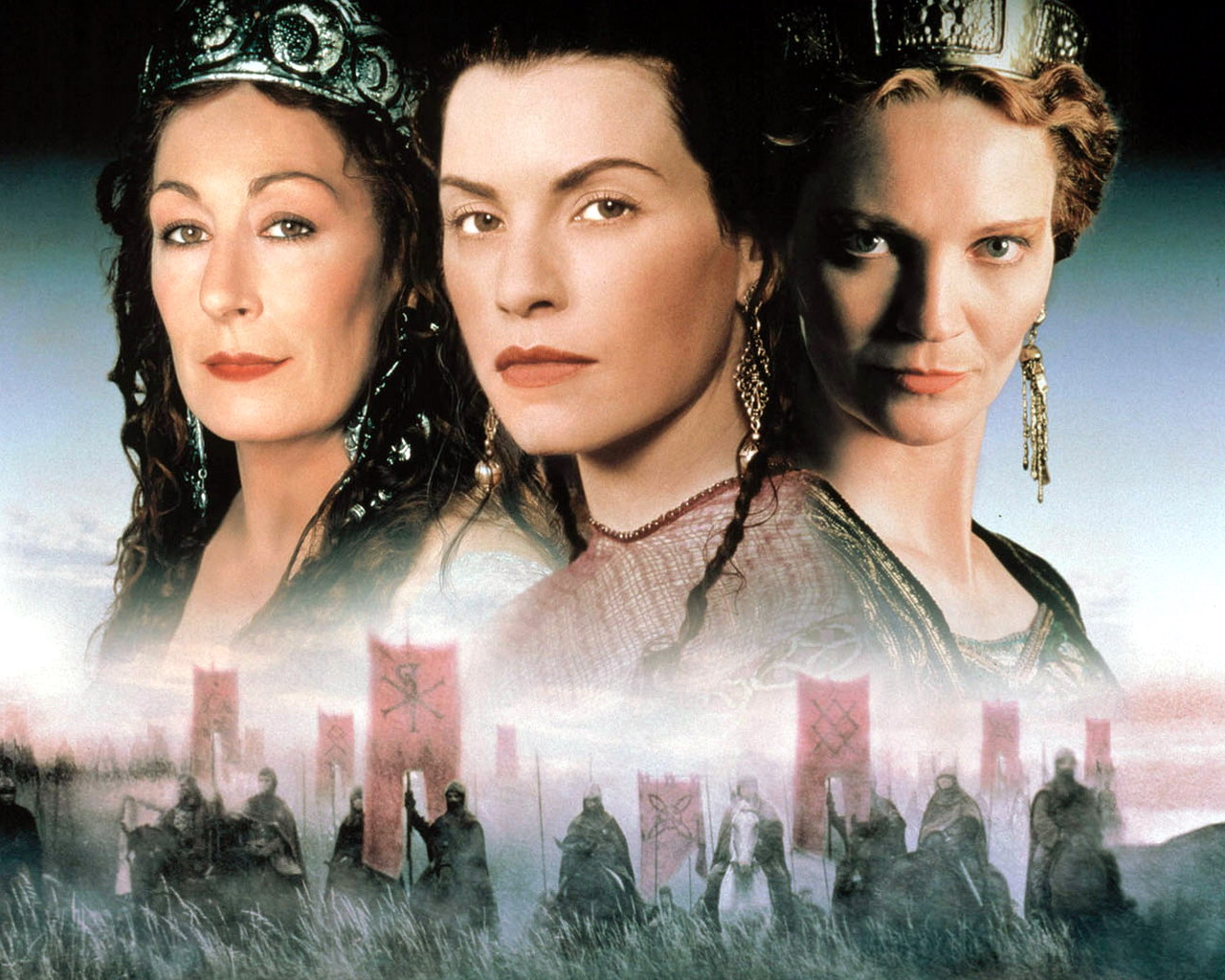 I felt truly honoured when TNT asked me to adapt Marion Zimmer Bradley’s extraordinary saga of the Arthurian saga as seen through the point of view of the women of the era. Women in particular award it the same enthusiasm that’s usually reserved for The Lord of the Rings, and I was profoundly relieved that I didn’t face a barrage of criticism for the fairly large structural changes I had to make. But I did them in the spirit of the book and everyone seemed to accept them in good part. My daughter Rebecca spent three months on the set in the Czech Republic working on the series, to my great satisfaction. The interview below gives some idea of the creative process from my point of view. The director was the Uli Edel. 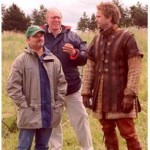 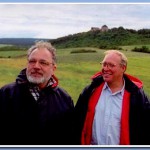 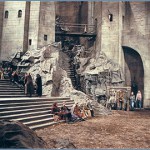 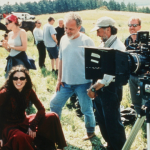 WHAT WAS YOUR REACTION WHEN YOU FIRST CONSIDERED ADAPTING “MISTS OF AVALON” FOR TELEVISION?
Have you ever seen someone race down to a beautiful river, leap enthusiastically into the water, discover just how cold it is and leap right back out again like a film being run backwards? That’s probably what I looked like when I plunged into Marion Bradley’s “Mists of Avalon” with the idea of adapting it for television.
WAS THAT BECAUSE IT WAS SO BIG? IT’S NINE HUNDRED PAGES, ISN’T IT?
And counting. But it wasn’t just big: it was also incredibly complicated in terms of plot, had a cast of thousands, covered several generations and was fully of REALLY strange names. For example Queen Gwenevere insisted her name be written Gwynhwyfahr. Plus an unnaturally high proportion of people beginning with M: Morgaine, Morgause, Mordred, Merlin – all the M’s.

SO WHY DIDN’T YOU JUST SAY NO?
Because it’s also a fabulous book. The characters are wonderful and compelling, there’s scads of sex, violence and terrible tragedies. When Jeff Levine of Turner Network Television told me about it he described it as a huge epic set in the wake of the collapse of the Roman Empire – and I thought “That sounds like my kind of thing”.

WHY? HAVEN’T YOUR MOVIES BEEN ABOUT LITTLE PEOPLE?
You mean Small Soldiers and The Borrowers? Well, in the case of the first one as the Dreamworks PR machine said “Small Soldiers – Big Movie”. And it had some big themes too – about how humans relate to machines and families at war with each other. In many ways it was a sci-fi movie. And The Borrowers had John Goodman in it – you can’t say he’s small. But seriously I’m a history buff – I’ve written two big David Lean style historical epics for Castle Rock – and I love trying to figure out the big patterns in human history. Have you ever read William MacNeill’s The Rise of the West: I really recommend it. He saw the big picture.

CAN WE GET BACK TO MISTS OF AVALON? WHAT HAPPENED AFTER YOU MET WITH JEFF LEVINE?
He introduced me to the great screen actor James Coburn, who had optioned the book many years ago, and TNT’s Julie Weiz, and they said not to worry about the complexity of the book because they had a synopsis. But the synopsis turned out to be forty pages long! Single spaced! And when you boil a plot down that densely reading it was like wading through Jell-O. So I decided again I couldn’t manage it.

SERIOUSLY?
Well – almost. Then I remembered all the years I’d spent as a TV reporter in the UK summarising complex legal cases in two minute live broadcasts with a bunch of lawyers breathing down my neck. If I could do it for the British High Court I could do it in the Dark Ages. So I sat down and synopsized the synopsis. Got it down to fourteen pages: but still single-spaced.

NINE HUNDRED TO FORTY TO FOURTEEN. THAT’S GOOD GOING.
But I still hadn’t got the pattern.

THAT’S LIKE DISTILLING BRANDY OR SOMETHING. AND WHAT CAME OUT?
I still have the notes from February 17th 1998. This is part of them: “As the ancient world comes to an end with the fall of the Roman Empire, its survivors struggle over the shape of the future: will it be Christian or the ancient religion of the Mother Goddess? Three sisters at the heart of the struggle: Viviane, the Priestess of the mother Goddess, Igraine, the one chosen to bear the Once and Future King, Morgause, the rejected one with a will to power.
Their weapons: seduction, creation, murder and magic. But unknown to them, the combination is creating something they cannot predict. Viviane’s use of Morgaine unwittingly creates Mordred – who will destroy her earlier creation, Arthur: but whose death will open the way for the two religions to come together.”

I WONDER IF THIS PROCESS REVEALED ANY WEAKNESSES IN THE BOOK YOU HADN’T SEEN BEFORE?
Yes. Marion had accurately interpreted Arthur as a Romanised Celtic chieftain trying to stem the tide of invading Saxon barbarians that began when the last Roman legions pulled out of Britain in the 5th Century. That was the framework for all the intrigue. But she’d been pretty vague about what actually happened in the war. She tended to refer to “skirmishes with the Saxons” and most of the military action happened offstage.
I felt strongly that we had to make the war story more organic and more muscular so we knew exactly what Arthur was trying to achieve while the women were trying (in the case of Morgaine and Viviane) to revive the old religion or (in the case of Gwynhwyfahr) to ensure the triumph of Christianity. That meant thinking through the course of the military struggle over the course of these two generations and interweaving it with the story so it came to a natural climax when Mordred challenged Arthur.

SO TO A BOOK FULL OF SEX AND VIOLENCE YOU DECIDED TO ADD MORE VIOLENCE?
More organised violence. There is a difference.

AND THAT WAS YOUR MAJOR CHANGE?
No – there was a bigger structural challenge. There were quite a number of sub-plots that had to be sheared away to keep the main story clear – but even when I’d done that I realised the main characters galloped off in all directions in the second half of the book and rarely came back together again. Viviane, for example, got beheaded in an argument over euthanasia with a character of no real importance at all. I wanted to keep her at the center of the action.

TO MAKE SURE YOU COULD OFFER THE PART TO A BIG ENOUGH ACTRESS?
Of course not! For the integrity of the story. But the fact that we ended up persuading Angelica Huston to play Viviane shows we didn’t make too many wrong choices. To say nothing of Juliana Margulies as Morgaine!

SO WHAT DID YOU ACTUALLY DO TO STREAMLINE THE PLOT IN THE SECOND HALF?
I cut out the Holy Grail. Scary move, but you see, in the book the plot spirals out of control because everybody goes off in search of the Grail and I don’t believe that in Dark Ages Britain, where they were fighting for survival, they would have actually done that. Once you keep them all concentrated on holding off the Saxons, you can focus on the drama at the heart of the action which is the Arthur, Gwynhwyfahr, Morgaine, Mordred, Viviane, Morgause – I was going to say “triangle” but it’s more like a quadrilateral, isn’t it? Or possibly a pentagram.

HOW DID YOU GO ABOUT SELLING THIS TO TNT AND THE PRODUCERS?
Well my first lessons in writing for television were learned almost literally at the feet of George Lucas on “The Young Indiana Jones Chronicles” where, because we were working in the hour-long format, everything was broken down into four acts. I had four hours, so I sketched outlines for sixteen acts. I recorded my outline on tape, listened to it, and memorized it. Then I went into TNT’s headquarters in Century City, took a deep breath, put my pages of notes in the glove box of the car and took the elevator to the fourteenth floor.

WHY DID YOU LEAVE YOUR NOTES BEHIND?
It keeps the adrenaline flowing when you have to remember a story lasting four hours, and I think that helps bring a certain energy to things. The boardroom has one wall made of glass with most of LA spread below, and it seemed to be full of people, but I got so into telling the story I forgot my audience and felt as if I was back in Dark Ages Britain, perhaps beside a fire in some chieftain’s hall, with the wind howling outside and the rain pelting down, and somewhere in the darkness the Saxon raiders ready to pounce. By the end I felt I was telling a story that had actually happened – and I had a sneaking suspicion that somewhere in the shades, Marion Bradley was saying “Yes Gavin: that’s how I want it told.”

SHE WOULDN’T HAVE BEEN SAYING: “WHAT HAVE YOU DONE TO MY STORY?”
No, I don’t think so, because my whole object was the stay faithful to the great vision she’d conjured up. The whole point of all that breaking down and building up again was to make sure that what she really wanted to say could be compressed into four hours of television.

AND DO YOU THINK YOU’VE DONE IT?
I hope so. I guess that’s what the viewers will let us know when they see the finished series. But bearing in mind the talent that came to the project once we had a script – I feel pretty good about it.