I have for some years now been creating a series of works composed of toys and other mass-produced cultural artifacts, which could be seen as Joseph Cornell boxes writ large: they are four feet long, three feet tall and between three and six inches deep. What interests me about mass market toys is that because they’re designed to grab kids’ attention as forcefully and quickly as possible they go right to the heart of the way people see the world at a particular time, revealing things about our culture and attitudes which in other contexts are much more modulated.

Sometimes my sculptures are built around a particular persona in pop culture how their images have evolved over time; sometimes they seek to recapture a particular moment like Christmas 1959 or 1919, and many impose a deliberately spurious, quasi-scientific order on the toys by linking them to particular historical eras, like ancient Egypt, the Middle Ages, the Roman Empire or early America. There are also three dimensional cartoons, imaginary worlds, and more philosophical pieces like ‘The Bluebird of Happiness.’ With engineer John Melzian I’ve recently begun to create electro-mechanically operated tableaux inside cabinets, inspired by the seaside entertainments which fascinated me as a child in places like Bridlington on the east coast of England.

My first show as a sculptor took place in Susan Schomberg’s Gallery in Santa Monica’s Bergamot Station Arts Complex in spring 2007. Actually getting the sculptures up the spiral stairs to her second storey gallery and in some cases raising them up throgh the window with the aid of a very tempremental forklift truck was an experience in itself, and installing them all (not just hanging them) was equally demanding. But it was wonderful to see so many of them together, we had a terrific opening party, and I received the accoldade of a review by Shana Nys Dambro in Art Ltd describing me as an “alt-folk-assemblage artist”, which till then I never knew I was!

This is the review in Art Ltd in which distinguished critic Shana Nys Dambro dubbed me as an “alt-folk assemblage artist”, which at last gave me an identity!
Here’s the review, my first as a sculptor. 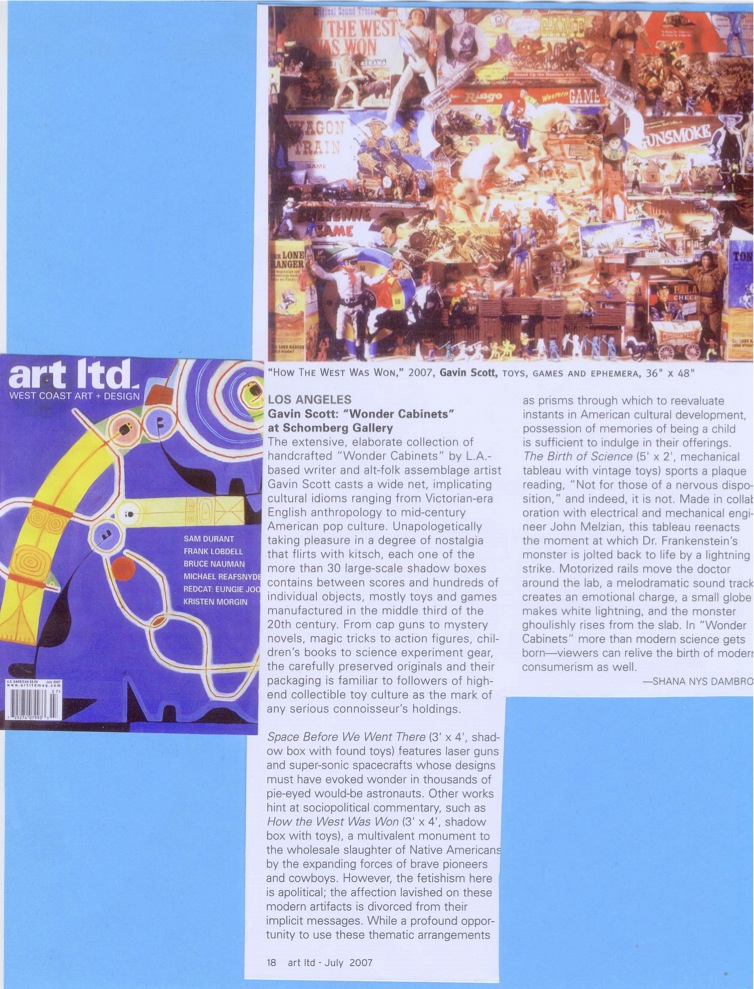