Posted at 10:28h in Absolutely Anything Diary by Gavin Scott 0 Comments
10 Likes
Share 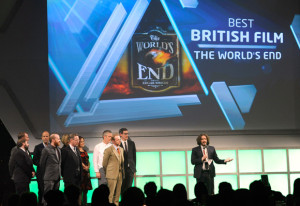 Sitting down in the canteen this morning eating bacon and eggs with producers Ben Timlett and Bill Jones, Terry and I realise we are in very exalted company. Last night Bill and Ben accompanied our star Kate Beckinsale who was presenting an award at the Jameson Empire Film jamboree (our other star Simon Pegg got two, of course) and they (B & B) sat in the company of stars like Hugh Jackman, Tom Cruise and Arnold Schwartzeneggar. Hugh, Tom and Arnold may have restrained themselves, but according to Bill and Ben virtually everybody else wanted to be in our movie (memo to Terry: can we find a part of Emma Thompson?) Better yet B & B realise they now qualify for the award for The Producers Who Have Employed Both Brian Cox (es?), because both Brians were there too. Actor Brian Cox is in B&B’s movie “Believe”, coming out this spring, and Scientist Brian Cox is in our movie as a television personality describing … well, I’m not allowed to say: you’ll have to see the film to find out!