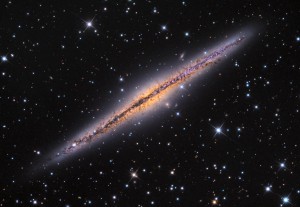 This is a picture of a galaxy which has put its feet up.

Dating back to the early days of the universe, it began its career creating stars as fast as it could. And then, for some reason, decided its stellar family was big enough, and stopped.

What does that mean for the inhabitants of the stars it did create, billions of years ago? Have they evolved mightily since then? Are they the wise and far-seeing aliens of our dreams? Who knows. But this is what has just been reported about these galaxies on “Milky Way Scientists” …

“An international team of astronomers have discovered the most distant examples of galaxies that were already mature and massive – not just young, star-forming galaxies in the nursery-room of the early Universe but also old, ‘retired’ ones – ‘granny galaxies’.

“A new paper, published in The Astrophysical Journal Letters by researchers from Macquarie University, the Australian Astronomical Observatory (AAO) and Swinburne University of Technology raises new questions about the early Universe, and what forced these mature galaxies to grow up so quickly.

“Scientists have known about large numbers of young galaxies in the early universe actively forming new stars,” says co-author Dr Lee Spitler. “The ones we’ve found have already gone through this phase: they have actually taken an early retirement from star-formation, when the universe was only 12% of its current age. Because they grew up so quickly, it’s likely they underwent an explosive period of

of new star formation – a brief, so called starburst phase – then retired.”

Spitler, a joint appointment between Macquarie University and the AAO, joined the team in using deep images at near-infrared wavelengths to search for galaxies in the early universe with red colors. The characteristic red colours indicate the presence of old stars and a lack of active star formation.

“These distant and early massive galaxies are one of the Holy Grails of astronomy,” Professor Karl Glazebrook, Director of the Centre for Astrophysics and Supercomputing at Swinburne University of Technology, said. “Fifteen years ago they were predicted not to even exist within the cosmological model favoured at the time. In 2004 I wrote a paper on the discovery of such galaxies existing only three billion years after the Big Bang. Now, with improved technology we are pushing back to only 1.6 billion years, which is truly exciting.”

The team located 15 galaxies at an average distance of 12 billion light years, only 1.6 billion years after the Big Bang. The galaxies are barely detectable at visual wavelengths and are easily overlooked, but in the new near-infrared light images they are easily measured, from which it can be inferred that they already contained as many as 100 billion stars on average per galaxy.

The finding raises new questions about how these galaxies formed so rapidly and why they stopped forming stars so early.

“The very fact that they exist is puzzling to astronomers,” says Spitler. “Galaxies, like people, take time to grow up. Something dramatic, like a starburst phase, might have caused galaxies to grow up or mature so quickly. You also may need something equally dramatic to cause the galaxies to retire and no longer produce new stars. We’ll be examining even more distant galaxies next year to try and understand this better.”

The galaxies were discovered after 40 nights of observing with the FourStar camera on the Magellan Baade Telescope in Chile and combined with data from Hubble’s Cosmic Assembly Near-infrared Deep Extragalactic Legacy Survey and the Great Observatories Origins Deep Survey. Using special filters to produce images that are sensitive to narrow slices of the near-infrared spectrum, the team were able to measure accurate distances to thousands of distant galaxies at a time, providing a 3-D map of the early universe.