Gavin Scott | History of the World in Soundtrack Albums 69-30BC
2212
post-template-default,single,single-post,postid-2212,single-format-standard,ajax_fade,page_not_loaded,,vertical_menu_enabled,qode-title-hidden,side_area_uncovered_from_content,qode-theme-ver-8.0,wpb-js-composer js-comp-ver-4.9.2,vc_responsive 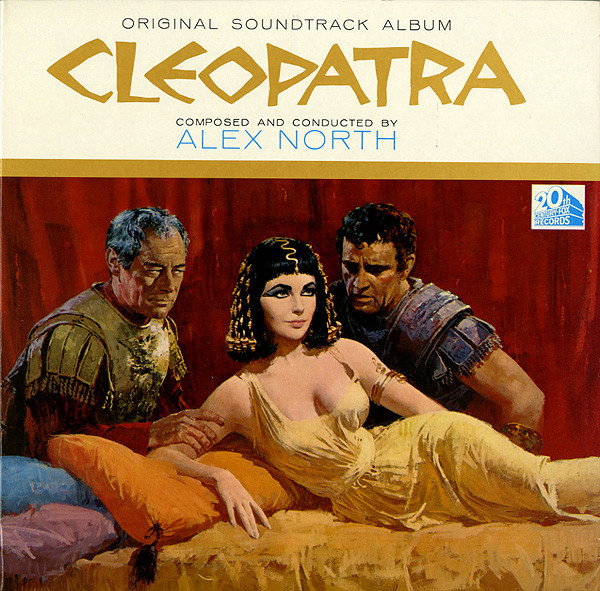 02 Jul History of the World in Soundtrack Albums 69-30BC

Cleopatra was Queen of Egypt and its last active ruler from 51 to 30 BC. As Wikipedia reports, she was a descendant of its founder Ptolemy I Soter, a Macedonian Greek general and companion of Alexander the Great After her death, Egypt became a province of the Roman Empire. Her native language was Greek, bug she was the only Ptolemaic ruler to learn Egyptian. When her father died in 51 BC, Cleopatra reigned jointly with her brother Ptolemy XIII, but a falling-out between them led to open civil war .After losing the 48 BC Battle of Pharsalus in Greece against his rival Julius Caesar, Pompey fled to Egypt, but Ptolemy XIII, at the urging of his court eunuchs, had him ambushed and killed before Caesar arrived and occupied Alexandria. Caesar then attempted to reconcile Ptolemy and Cleopatra, but Ptolemy’s forces besieged her and Caesar at the palace. Shortly after the siege was lifted by reinforcements, Ptolemy XIII was killed in battle. Caesar declared Cleopatra and another brother joint rulers but maintained a private affair with Cleopatra that produced a son, Caesarion. Cleopatra traveled to Rome as a client queen and stayed at Caesar’s villa. After the assassinations of Caesar she sided with Octavian and Mark Antony with whom she had an affair. He became increasingly reliant on her for both funding and military aid during his invasions of the Parthian Empire and the Kingdom of Armenia, but their marriage, and Antony’s divorce of Octavian’s sister led to the final war of the Roman Republic. After defeating Antony and Cleopatra’s naval fleet at the 31 BC Battle of Actium, Octavian’s forces invaded Egypt in 30 BC and defeated Antony, leading to Antony’s suicide. When Cleopatra learned that Octavian planned to bring her to his Roman triumphal procession, she killed herself by poisoning, contrary to the popular belief that she was bitten by an asp. 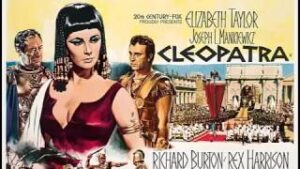 In 1960 principal photography on the film Cleopatra, (starring Elizabeth Taylor, Richard Burton, Rex Harrison, Roddy McDowall, and Martin Landau) began at Pinewood Studios but Taylor’s health problems delayed further filming. Production was suspended after it had gone overbudget with only ten minutes of usable footage. Rouben Mamoulian resigned as director, and was subsequently replaced by Joseph L. Mankiewicz. Production was re-located to Cinecittà in Rome, where filming resumed in 1961, without a finished shooting script. During filming, a personal scandal made worldwide headlines when Taylor and Richard Burton had an adulterous affair. Filming wrapped in July, 1962, and further reshoots were made from February to March 1963. With the estimated production costs totaling $31 million, the film became the most expensive film ever made up to that point and nearly bankrupted the studio, 20th Century Fox. It got a generally favorable response from film critics, and became the highest-grossing film of 1963, earning box-office receipts of $57.7 million in the United States and Canada, and one of the highest-grossing films of the decade at a worldwide level, though it initially lost money because of its $44 million production and marketing costs. 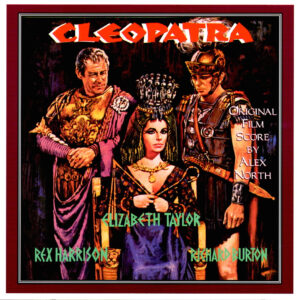 The music for Cleopatra was created by Alex North. North was born Isadore Soifer in Pennsylvania, to Ukranian Jewish parents: his father was a blacksmith and his mother ran a grocery store. During the Second World War, North served as a captain in the United States Army, was responsible for “self-entertainment” programs in mental hospitals and composed music for more than twenty-six War Department documentaries. He spent years in New York writing music for stage plays, including Death of a Salesman, directed by Elia Kazan, who brought him to Hollywood in the 1950s. North was one of several composers who brought the influence of contemporary concert music into film, in part marked by an increased use of dissonance and complex rhythms. But there is also a lyrical quality to much of his work which may be connected to the influence of Aaron Copland, with whom he studied. North managed to integrate his modernism into typical film music leitmotif structure, rich with themes. One of these became the famous song “Unchained Melody”. His best-known film scores include A Streetcar Named Desire, Death of a Salesman, Viva Zapata!, The Rainmaker, Spartacus, The Misfits, Cleopatra, Who’s Afraid of Virginia Woolf?, Dragonslayer and Under the Volcano.