18 Mar Absolutely Anything Rehearsals Day One

Posted at 12:18h in Absolutely Anything Diary by Gavin Scott 0 Comments
6 Likes
Share

To our production base, the old Ashmount Primary School in North London, where Terry Jones has just arrived. It’s great to see him again and to celebrate the fact that the script we’ve been writing for so long is finally getting made. which is an abandoned educational establishment and the perfect location both for the school where Neil teaches and the flat where he discovers his supernatural powers. It’s now buzzing with set dressers and carpenters and even people doing up the daffodils in the school grounds – and the old staff car park now has a very space-age looking trailer (complete with what looks like a blazing hearth) for Neil himself, in the form of Star Trek and Mission Impossible star Simon Pegg. Today is the first day of rehearsals, and Simon is getting to know Mojo, the dog who will play the role of Dennis, the lucky canine who is imbued with the power of speech as a result the extraordinary powers given to Neil by the Aliens. Terry takes Simon through his scenes in Neil’s convincingly bachelorish flat, with me reading the part of the TV newsreader who announces all the disasters Neil’s ill-thought-out interventions have caused, and it’s great to hear other people laughing at the jokes after all the time it’s just been Terry and me telling each other how funny they are. We’re off to a good start. 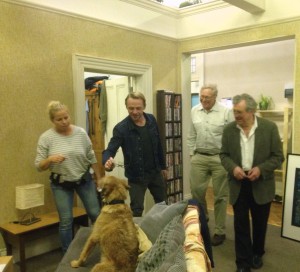 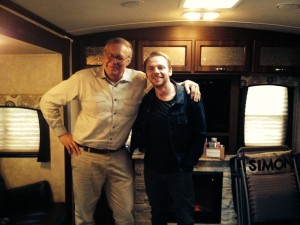