Posted at 03:52h in Absolutely Anything Diary by Gavin Scott 0 Comments
8 Likes
Share 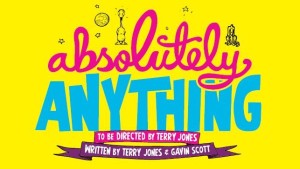 Ad libs: we got ‘em. During Eddie Izzard’s Absolutely Anything scene with Simon Pegg (sinister headmaster berates slacker teacher) some unfortunate crew member left his walkie talkie on and loud voices broke into the take. Without missing a beat Mr Izzard announced “That’ll be my pizza delivery” so sincerely we almost expected a delivery guy to burst onto the set. He also improvised a joke about Kumbaya which has never been made before. Leading Simon P to improvise another joke about washing his dog. Terry and I are beginning to wonder if writing a script was really necessary.