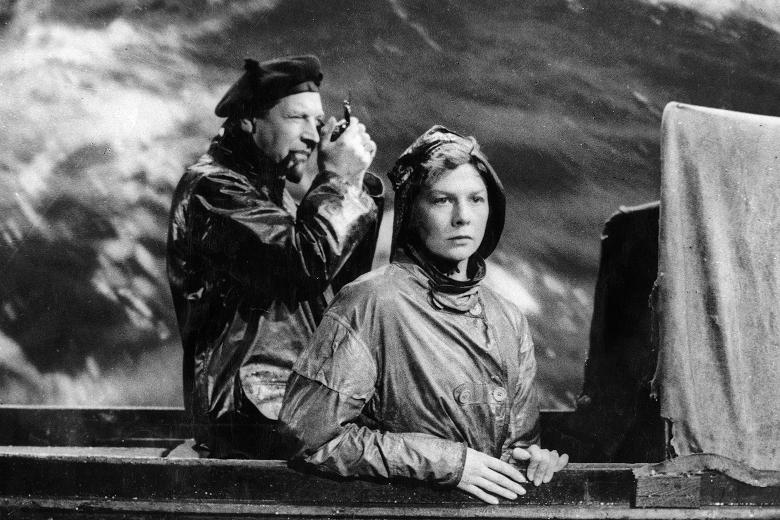 I’ve been giving some thought to the movies which might have been seen in 1946 by Duncan Forrester, the hero of The Age of Treachery, the detective thriller set in that year which Titan Books and Random House are publishing next month. One of the first he saw, had in fact been released in 1945, but he was still able to catch up with it in early 1946 at the Astoria cinema on Holderness Road in Hull, where his mother lived. The film was I Know Where I’m Going, written produced and directed by Michael Powell and Emeric Pressburger , starring Wendy Hiller and Roger Livesey, to say nothing of the great Finlay Currie, and even the future 60’s pop star Petula Clark (Downtown) when she was a child. Duncan and his mother both hugely enjoyed the film, and I’m not surprised – it’s one of my favorite movies, and if you didn’t know it I recommend you give yourself the treat of tracking down. Shot on the west coast of Scotland in the closing days of the war, it tells the story of a Joan Webster, tough-minded, ambitious young Englishwoman heading for the Scottish island where she is to marry the chairman of the company she works for: and when bad weather prevents her making the crossing, finds herself plunged into all the romance Highland Scotland can provide.

It is so full of delights it’s hard to list them all – the brilliantly elegant mock-documentry title sequence, the surrealist train journey to Glasgow, the moment when Joan first sees the massive Highland cattle appearing through the mist, the terrifying encounter with the legendary whirlpool of Corryvreckan, Joan’s meeting with an ancient Scottish aristocrat remembering the glories of the past, the moment when she enters the castle that holds the secret of her fate.

One of my favorite sequences is the cèilidh, where an old highland couple celebrate their diamond wedding anniversary under the supervision of their soldier son, played by young John Laurie, much later to announce, almost weekly, “We’re doomed!” in Dad’s Army.

And then there’s the heart-lifting moment when the three pipers appear. I won’t spoil it by saying when …

The voice of the company chairman Joan is supposed to marry, by the way, is that of Norman Shelley, who later was Winnie the Pooh on BBC Home Service Children’s Hour. To say nothing of Dr. Watson.

Fascinatingly, Roger Livesey, the male star, never came anywhere near Scotland during the filming: he was performing in a play by Peter Ustinov in London. And yet, through Michael Powell’s movie magic, you could swear he was there on location every day. In his memoirs Powell reveals that he had originally offered the part to James Mason, and the deal had fallen through because of all the hardship Mason had assumed Powell would put him through up in Scotland. If only he had known.

Powell’s memoir also reveals another fascinating piece of the cultural jigsaw. While he was location scouting on Jura, he came across a cottage where he was told an eccentric Englishman was living, someone called Blair.

Under his pen name of George Orwell, Eric Blair was later to produce the great book he was to write in that very spot: 1984.