Posted at 22:35h in Absolutely Anything Diary by Gavin Scott 0 Comments
12 Likes
Share 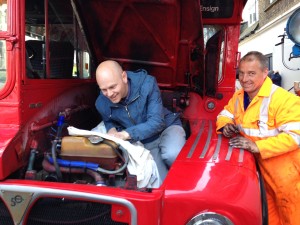 Kare Sivertsen, our Producer Assistant, climbed into the engine of a Routemaster bus today, doubling for Simon Pegg, who has made yet another of his badly thought out wishes about being in a bus. What he hasn’t realised yet is that his powers take his commands VERY literally, and he ends up jammed inside the engine compartment with only his arm sticking out. But when you open the bonnet of a Routemaster to the untrained there seems to be no room whatsoever for us to perform this gag. Enter Kare, who ingeniously removed some (perhaps not very crucial) bits, laid a blanket over the most uncomfortable parts of what remained, climbed gamely in and had the bonnet shut on him neatly sticking his arm out through an oil hatch. Voila! 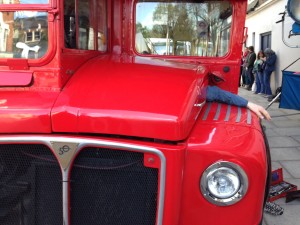 Mind you, he might have been a bit less relaxed if he’d known who was driving the bus! 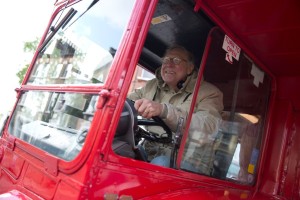